Sometimes, Life Is Hard, and it's Easy to Get Down...
Really.

It's that you WON'T do what it takes- whatever that is- to get it done.
I know what you're saying to yourself RIGHT NOW.
You're making the excuses-and, as my dear friend and mentor Steve Sipress says-
"You can make excuses, or you can make money, but you can't make both."

How would I know?
I've BEEN THERE.
You see, I was never supposed to be here...

I was supposed to be a DOCTOR.
I learned, I studied, and tread the path laid out for me... and FAILED.
Over and over.

It was rather exhausting- working three part-time jobs, studying all night, taking classes after graduating college...
The truth is, I was ALLOWING myself to fail- because it wasn't where I really wanted to be.
Once I realized that, my life got a LOT easier.
I was BORN to sell, and DESTINED to be in the outdoor world- but it certainly wasn't easy.

I worked for FREE for over a year.
I spend THOUSANDS of dollars travelling, meeting, and entertaining.
I wrote and wrote and wrote article after article... and was rejected.
I applied to EVERY JOB I COULD FIND- and was given the most ABSURD excuses.
"You've never sold "apparel" before."
The foolish, "You're rather "overqualified" for this position...
"You have a lot of sales experience, but none "in the industry."
and, my personal favorite, the generic, "Though your resume is impressive, we have decided to move forward with another candidate."

Then, things began to happen. I made my own waves. I turned down jobs offered to me, and I began to carve my own path.
I learned how to POSITION myself.
Ironically, I was relating my story to someone that is a huge sports fan that let me know a BUNCH of similarities to a professional athlete that were directly related to my struggles.

Check out the NFL history report for this athlete.

Second string QB for high school team that went 0-8 Freshman year.
Started Sophomore year because no other QB went out.
Varsity passing: 219 passes for 3,514 yards and 33 touchdowns
Baseball catcher and football quarterback in high school who was drafted for MLB in the 18th round of the June 1995 baseball draft. Opted for football and redshirted in '95 as #7 QB on the depth chart.

Poor build. Very skinny and narrow. Ended final season weighing 195 pounds and still "looked like a rail" at 211. Looks a little frail and lacks great physical stature and strength. Can get pushed down more easily than we'd like. Lacks mobility and ability to avoid the rush. Lacks a really strong arm. Can't drive the ball down the field and does not throw a really tight spiral. System-type player who can get exposed if he must ad-lib and do things on his own.
Vertical jump- lowest of peers.
40 yard dash time: Lowest ever

Seems to have decent field view and decision making ability.

Has thrown 456 Touchdown passes in the NFL- the 4th most ever.
Has 61,582 passing yards- the third most EVER.
Has thrown the second most TD passes in a single season- 50.
Has played in 7 Superbowls and WON 5- the most EVER.

In case you haven't figured it out- this athlete is Tom Brady, and he was never supposed to be here, let alone WIN. 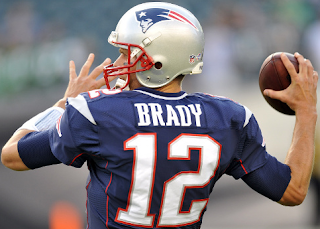 Remember that the next time you think things are "hard." or that you "can't"
Remember - "CAN'T" could easily be spelled "W-O-N-'T"

I'm not, nor have I ever been a New England Patriots fan, but I am certainly an admirer of Tom Brady.
He wanted it.
He wanted it bad enough to work for it- to put HOURS in the gym and the weight room. HOURS running through plays. HOURS visualizing outcomes and wins.

What's your excuse?
Too small?

Everyone else is better? Faster? Stronger?
SMARTER?
Luckier?

...and he was never even supposed to be there.
That can be you.

What types of obstacles have been in YOUR way?
What have you done to overcome them?

Do you need help with a challenge?
Please use the comments below to let us all know.