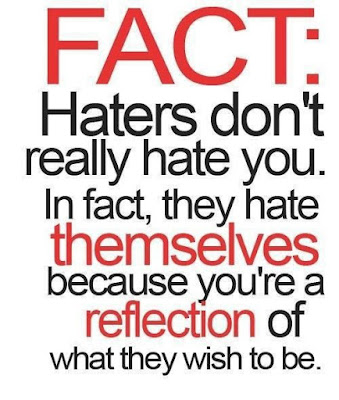 You see, if I am receiving mail from "haters" it means my message is most definitely reaching  my audience and MORE!

Whenever I send something out and I get nasty responses back by a few people, it gives me a little warm feeling in my heart to know that I must be absolutely motivating them to take action and that, based on the laws of statistics and large numbers that for everyone there is like that there are about 50 to 100  that  have received a tremendous value from what I have sent, posted, or sold.

One of the best things you can do when you are engaging with these people is to let them know that you  appreciate their feedback, but that you are a "positive" person who believes in taking MASSIVE action rather than sitting by the sidelines waiting for something to happen. That is a very difficult line of thought to respond negatively to.

I'll give you an example that happened to me recently...
I sent out a release to a bunch of Outdoor and gun writers about a new contest that I am helping to promote.

I received a scathing response from one, what I would call, "Lower-mid-level" writer.
He writes for some local and regional publications and is an occasional "guest" on some television shows.
"UNSUBSCRIBE FROM THIS LIST!"

Right now I have an "auto response" for anyone that sends me an email.
I want them to know that I received it, but am so busy with show season that  I may not respond right away, but I still want to talk.

This is where it gets a little UGLY.

"I SUBMITTED AN UNSUBSCRIBE REQUEST!!!! THIS IS A VIOLATION OF CAN/SPAM!!! YOU ARE IN VIOLATION OF FEDERAL LAW AND CAN BE PROSECUTED FOR HARASSMENT!!!

Needless to say, I sent confirmation that he was "unsubscribed" from my list- With a nice note to make sure he takes his blood pressure pills.
I learned several things from this.
One- that my emails went out and were delivered.
Two- that the message resonated with the audience.
Three- that I learned of one worthless member of my list that shouldn't be on it.

Now, I am subscribed to HUNDREDS of email lists. Many become useless/worthless over time, but I still learn a TON from them- Things like this must be a compelling headline- I opened it- and what are the typical things beoing pushed in the info-marketing world. Also, what is valuable and how long does it remain so.

Here are the questions that he, and you, should have asked before "unsubscribing" from my emails.
1. Do I want to not have the opportunity to learn something from this person/company/list?
2. Is this one thing of lesser value worth eliminating the possibility of hundreds of their more valuable things?
3. What can I take from this person/company/list that I can easily "re-purpose" to my own business? (Secret- I steal good headline ideas from my own subscribed lists all the time)

That's a question that everyone will need to answer in this "new outdoor economy."
Posted by Unknown at 7:06 AM