Why You as a Firearm Owner, Should Never Shop at Dick's Again

I have only written a few of articles like this in my entire life.

I also feel that it is a shame that I must do so.
My most recent came after under armour chose to abandon hunters and legal hunting by taking the side of anti-hunters against lawful hunting practices.
This article now comes after Dicks sporting goods comes out against the Second Amendment and states that not only will they not sell what they incorrectly categorized as "assault style" weapons (a false and misleading name), but they will no longer carry any "high capacity”(open to “interpretation”) magazines,  and will no longer sell firearms to anybody under the age of 21. 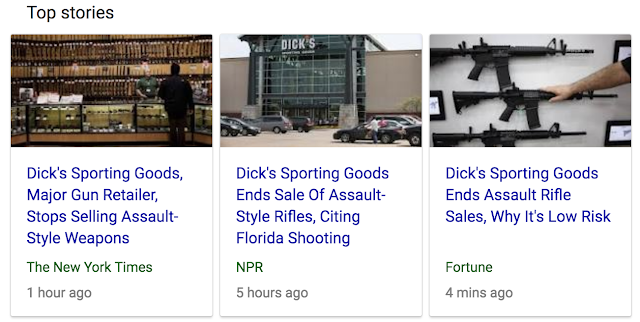 Dicks, like under armour and their foolish decision to abandon a large number of their base, has every right to do these things as they are a private business entity and dictate what they can and will sell in their stores.
That doesn't mean that I have to buy anything from them ever again – nor does it mean that I have to accept what they are doing as right and not spread the word to my entire network and all gun owners in the country that what Dicks has actually done is leap over a very large "line in the sand."

Many people against the Second Amendment use excuses to violate people’s rights.
The way you determine a violation is easy.
There is a very effective litmus test to determine whether something passes constitutional muster. That test is to apply that regulation or restriction against any other constitutional right and see if it would be OK to do so.

For example, would it be OK to require "training" or to require a "license" in order to vote?

Would it be OK if we made someone pass a background test in order to freely practice their own religion?

What about banning just "certain parts" of religion? Like, what if we said Christianity was OK, but the practice of the Muslim religion or the Jewish religion was not… Would that be OK?
Would that be a violation of someone's rights?

Why is it that we are OK with such blatant violations  of another constitutional right?

The answer is very simple… Many people in the general public have been "conditioned" by false, misleading, and leading fake news and fake journalism - up to and including the most recent re-categorization of a firearm as a "full semi automatic."
There are those in power that wish to see all of us in this country under their “rule.”
They speak of “fair” and “equitable” and what is right and just for “the majority.”
…But that isn’t what our country and constitution is about.
We are and have always been about the rights of the INDIVIDUAL over those of the MAJORITY.
Equal OPPORTUNITY- not equal OUTCOMES.

A much more effective solution to the problem of school shootings is to use the principles found in the book "Guns the Right Way" – the definitive guide to introducing youth and children to firearms (and, not coincidentally, written by YOURS TRULY) – and  to take seriously things like bullying, isolated individuals, and people that have been reported to the police and the FBI on numerous occasions that have been ignored - and should be ignored no longer. To learn more about kids, guns and Ace, you can visit my website. Want a copy of the book?  You can order it on Amazon or HERE.

I urge each and every one of you that owns a firearm  and believes that the Second Amendment is a God-given right to that shall not be infringed to do several things starting TODAY:

1.  Share and like this post, and others like it, throughout your social networks to demonstrate the unity and numbers we truly have.
2. JOIN THE NRA.   There is one organization that has constantly and consistently been the protector of Second Amendment rights in the United States – it also happens to be the oldest and largest civil rights organization in the entire world. It is the National Rifle Association, and if you aren't a member and own a gun, then shame on you.
3.  Write letters. Write a letter to your congressman. Your members of the Senate. Write a letter to the president. Write a letter to the mayor of the largest city in your area. Write letters to the editors of your local and regional newspapers. Take the time to write two paragraphs. You can then address the same letter to multiple people.
4.  Support the people that support you and your beliefs, and withdraw your support as well as pontificate against supporting those that don't.
Under Armour  Learned the hard way that people that hunt also buy things like baseball, soccer, football, and hockey equipment. They buy running shoes and athletic apparel. Now they just don't buy any of it from under armor. With their profits down almost 80% year-over-year, it's not a coincidence that their downfall coincided with their  Choice to support anti-hunters.

We are all in this together and, now, more than ever, are in the fight of our lives to maintain our rights and our way of life.
Don't let a group of politicians that believe they "know what's best for you" as well as large numbers of feeble minded, easily lead individuals that simply scream loudly to decide your fate.

Who is Jerry "Ace" Luciano? That depends on whom you ask. Ask anyone in the outdoor world, and they'll tell you that Ace is a big game hunter and adventurer that has a great deal of sales knowledge. Ask someone in the corporate world and they might tell you that Ace is the guy that smashes and sets sales records that may have stood for decades. Hunter. Fisherman. Outdoorsman. Youth Mentor. Writer. Best-selling author. Entrepreneur. Sales Executive. Seminar speaker. Fundraising Professional. These phrases and more have all been used to describe this dynamic outdoor personality and all around "good-guy." A self-described outdoor "generalist" who is a jack of many trades, and a Master of several, Ace is often described as "that guy..." To learn more bout Ace, visit www.aceluciano.com.
Posted by Unknown at 10:58 AM